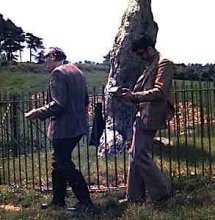 In the early period (late 1970s- mid-1980s) when the Dragon Project (later a Trust) conducted its physical monitoring, it also ran a side-programme making on-site studies of people claiming skills in primary sensing, such as dowsers and psychics. Could they tell us anything reliable about the sites we looked at, especially the Rollright Stones in Oxfordshire, the main field HQ of the project? Dowsers were invited individually on site and given identical reference materials – three site plans on which to mark their dowsing findings at three different, set levels beneath the ground. This produced mixed results, but there was a tendency for certain patches of ground within the Rollright stone circle (the “King’s Men”) to be identified as anomalous. Some of the dowsers felt these might mark places where meteor fragments had landed thousands of years ago.

The psychics’ findings (using mainly psychometry) were inconsistent and sometimes contradictory and of little or no informational value. But this side- programme was, and remains, incomplete.

Pictures of this period of research can be found in the Gallery.